Interview conducted February 2021 on unceded Kaurna land. Always was, always will be.

Irene’s reflections on the Springbok tour.

We had arrived in Adelaide from NZ a couple of months before, and the family had spent most of the time in and around Elizabeth. The airport was an amazing sight!  There were so many people – I would guess many thousands – they were not only filling the building, but were spread all across the runways and surrounding grassy areas.  In those days there was just a waist-high fence dividing the people from the runways and you just climbed down or up the stairs to the plane and walked across the asphalt to the building.  So it was easy to get onto the runway area.

There was no way any plane could land or take off while we were all there!

Once the message came through from the Uni that the first of the Springboks had been taken to that motel the entire crowd streamed over there (it was somewhere nearby) and filled the road around the motel.  The noise was incredible. The student on the motorbike had rung the Uni students’ office. It was long before the days of mobile phones. 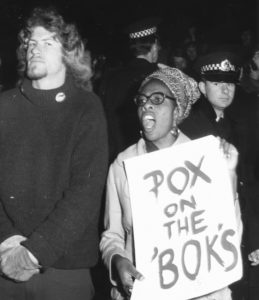 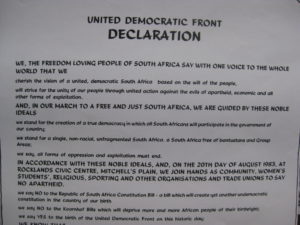 Sekai Holland was from Zimbabwe and came from Sydney, following the Tour around the country.  I’ll never forget the faces of the Springboks as she leaned into their just-arrived taxi at the motel, snarling at them “Feusack Springbok!”, as though they were vicious wild dogs.  They cringed back into their seats, clearly wishing they could get out and away from the baying crowd.