Well this is something new. Michael Bayliss from the Post Growth Australia podcast did an interview with me here where I live at Christie Walk. It was very strange for me being on the other side of the interview, so here it is, a short interview about my story then an interview with Mark Allen from Wholistic Activism and Town Planning Rebellion and then a discussion with Michael, Mark and I about why there should be more Christie Walks and maybe covering some of the reasons why there is not. 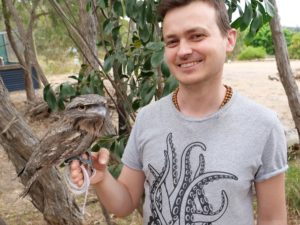 Michael Bayliss is host of the Post-Growth Australia Podcast. He has been an activist for the past decade within the environmental and animal rights movements.  Academically trained in Economics, Michael’s subsequent work history was focused in sport and community inclusion in the disability sector, where he was a finalist in the WA support worker awards in 2012.

In recent years, he has returned to economics (sort of) and he now works almost full time in the Post-Growth sphere.  Achievements include interviews on Radio and TV, including ABC News, Jon Faine, SBS radio and, strangely enough, Sky News and Neil Mitchell.  He was awarded the most read article in 2018 for Independent Australia.

In the volunteer sphere, he has coordinated various grassroots community groups in Melbourne such as Doing It Ourselves and Gnomes Urban Gardening Network. He coordinated the monthly food swap at Melbourne’s Peppertree Place.  He co-founded Town Planning Rebellion in 2015 (then called Population, Permaculture and Planning) as a means to communicate the critical role that town planning plays in the move towards future sustainable communities. He writes songs around environmental and climate change grief with his band Shock Octopus.